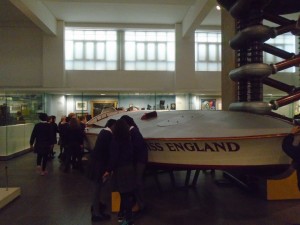 On 7th November, Year 5 went to visit the Science Museum as part of their Science work about forces. Here is a blog of the trip by Adele and Alma.

When we got inside the museum, one of the things we saw was a piece of the moon. The astronaut David Scott was the first one to find it and bring it back to earth. The space exhibit was really fun to look at and it had lots of stuff to do. When we went to modern world exhibit we saw “Miss England”, Britain’s fastest speed boat. Instead of having a propeller it had an aircraft engine that made the boat faster. After that we explored the red mill steam engine that made power for cotton factories. Then we saw a Ford Diesel lorry. We looked at the seven tyres made of rubber which have deep treads to increase friction. The last thing we saw  was a super marine sea plane. The plane was the fastest vehicle on the planet in 1931 that could take off on land and water.

Throughout the whole trip we discussed gravity, air resistance, friction, aerodynamics, weight, mass and upthrust. The whole trip was a fantastic forces trail.